"In Europa e in Nordamerica dominano rispettivamente i gruppi A e 0, mentre in Asia è molto abbondante il gruppo B" Facial recognition camera system named ‘Orwell’ to be installed in all 43,000 schools in Russia 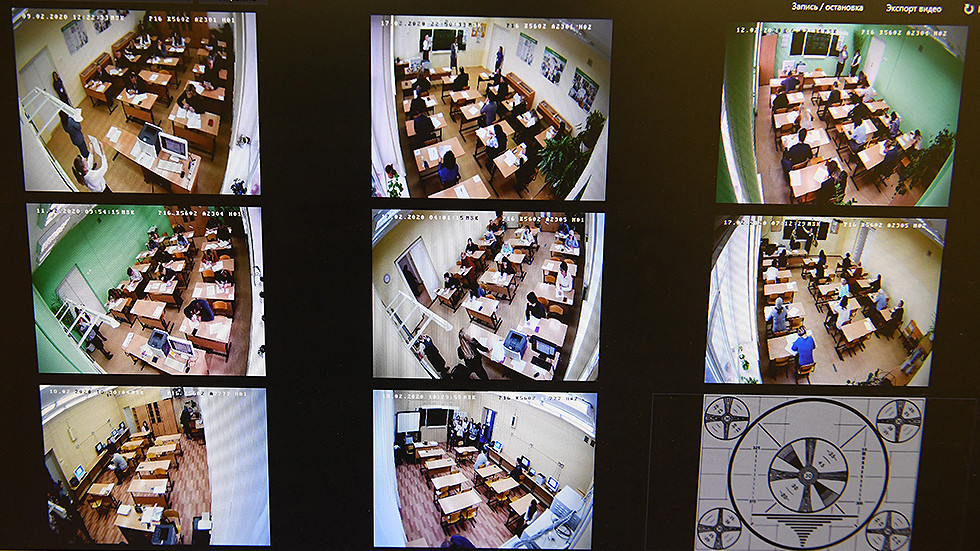 Facial recognition camera system named ‘Orwell’ to be installed in all 43,000 schools in Russia


In conclusion, our experiments using cell lines and a mouse model suggested that vitamin D could be activated in the lungs and that dietary intake of vitamin D might prevent interstitial pneumonia by suppressing pulmonary fibrosis. Oral intake of vitamin D may be useful for prevention or treatment of various diseases.

Results 43 consecutive patients were identified with 17 patients in the DMB arm and 26 patients in the control arm. Baseline demographic and clinical characteristics was significantly different for age between the two groups. (Table 1) In the treatment arm, most patients received DMB within the first day of hospitalization with a median duration of therapy of 5 days (interquartile range of 4 to 7 days). Significantly fewer patients receiving DMB required subsequent oxygen therapy compared to controls (3/17 vs 16/26, P=0.006) (Table 1 & Figure 1). On univariate analysis, increasing age and hypertension demonstrated significantly higher odds ratio for oxygen therapy, while exposure to DMB therapy was associated with a significantly improved odds ratio. (Table 2) Multivariate analysis showed that DMB remained a significant protective factor against clinical deterioration after adjusting for age or hypertension separately.


In the randomized trials and meta-analysis, vitamin D supplementation has been shown to have protective effects against respiratory tract infections; therefore, people who are at higher risk of vitamin D deficiency during this global pandemic should consider taking vitamin D supplements to maintain the circulating 25(OH)D in the optimal levels 75-125 nmol/L. Some retrospective studies demonstrated a correlation between vitamin D and COVID-19 cases and outcomes, while other studies did not find the correlation when confounding variables are adjusted. Yet, there is insufficient evidence on the association between vitamin D levels and COVID-19 severity and mortality. Therefore, randomized controlled trials and large-scale cohort studies are necessary to test this hypothesis.

Role of vitamin D in preventing of COVID-19 infection, progression and severity 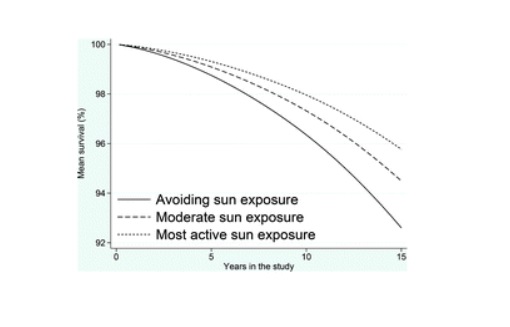 
The authors report the results of a longitudinal cohort study designed to assess how all‐cause mortality risk may be influenced by avoidance of active sun exposure.

The primary finding of Lindqvist et al . was that the mortality rate amongst sun avoiders in their cohort was approximately twice that of the most active sun exposers, yielding an excess mortality with a population attributable risk of 3%. This is a small effect, but very significant due to sample size and power. The authors are guarded in their discussion of the reasons why sun avoidance is associated with increased mortality.


Vitamin D(3) affects both the innate as well as adaptive immune responses. Epidemiological studies have established that vitamin D(3) deficiency plays an important role in tuberculosis (TB) and viral influenza prevalence as well as susceptibility to active disease in TB.

Translating the Role of Vitamin D3 in Infectious Diseases


During the last decades new favourable associations between sunlight and disease have been discovered. There is growing observational and experimental evidence that regular exposure to sunlight contributes to the prevention of colon-, breast-, prostate cancer, non-Hodgkin lymphoma, multiple sclerosis, hypertension and diabetes. Initially, these beneficial effects were ascribed to vitamin D.

The available data on the negative and positive effects of sun exposure are discussed. Considering these data we hypothesize that regular sun exposure benefits health.


There is potentially a great upside (in terms of improving overall health and well-being) to increasing serum 25(OH)D levels above 30 ng/mL. An effective strategy to prevent vitamin D deficiency and insufficiency is to obtain some sensible sun exposure, ingest foods that contain vitamin D, and take a vitamin D supplement.


The present study provides the first evidence that sunlight may rapidly inactivate SARS-CoV-2 on surfaces, suggesting that surface persistence, and subsequently exposure risk, may vary significantly between indoor and outdoor environments. However, in order to fully assess the risk of exposure in outdoor environments, information on the viral load present on surfaces, the transfer efficiency of virus from those surfaces upon contact, and the amount of virus needed to cause infection are also needed.


Results: There are now sufficient data to conclude that immune modulation by psychosocial stressors or interventions can lead to actual health changes, with the strongest direct evidence to date in infectious disease and wound healing. Furthermore, recent medical literature has highlighted a spectrum of diseases whose onset and course may be influenced by proinflammatory cytokines, from cardiovascular disease to frailty and functional decline; proinflammatory cytokine production can be directly stimulated by negative emotions and stressful experiences and indirectly stimulated by chronic or recurring infections. Accordingly, distress-related immune dysregulation may be one core mechanism behind a diverse set of health risks associated with negative emotions.


Psychoneuroimmunology and Psychosomatic Medicine: Back to the Future


Previous research based on American and European populations indicates that negative emotions can aggravate inflammatory processes (Kiecolt-Glaser et al., 2002; Marsland et al., 2008). The present findings provide evidence for a cultural specificity to this conclusion. Replicating prior reports, the present study found that negative emotions are linked to increased levels of the pro-inflammatory cytokine IL-6 among a large national sample of middle-age and older adults across the United States. 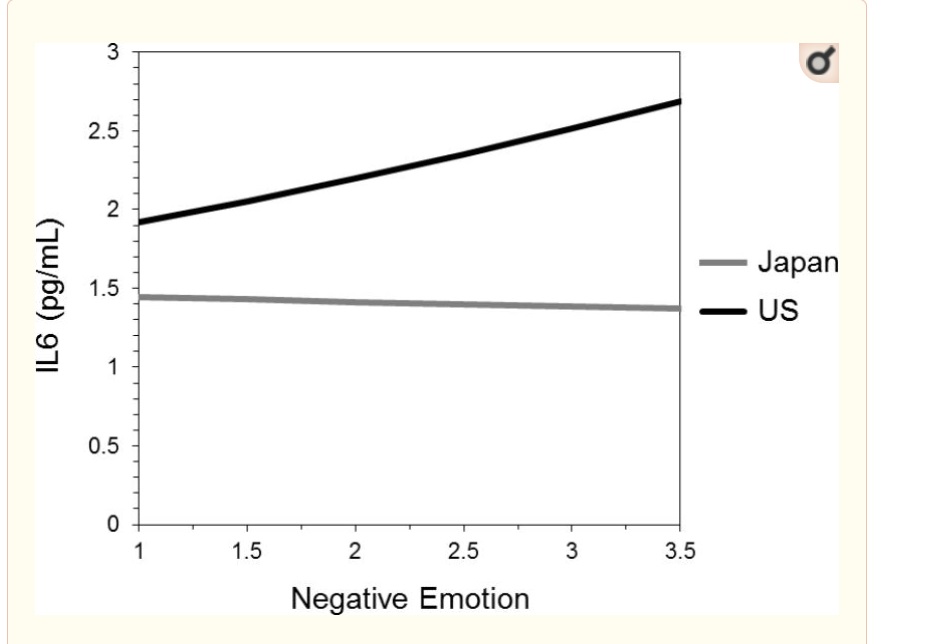 
We examine the link between dispositional positive affect and one potential biological pathway between positive emotions and health-proinflammatory cytokines, specifically levels of interleukin-6 (IL-6). We hypothesized that greater trait positive affect would be associated with lower levels of IL-6 in a healthy sample. We found support for this hypothesis across two studies. We also explored the relationship between discrete positive emotions and IL-6 levels, finding that awe, measured in two different ways, was the strongest predictor of lower levels of proinflammatory cytokines. These effects held when controlling for relevant personality and health variables. This work suggests a potential biological pathway between positive emotions and health through proinflammatory cytokines.


Bodington had noticed that people who spent their time indoors were susceptible to tuberculosis, whereas those who worked outdoors, such as farmers, shepherds, and plowmen, were usually free of the disease. He reasoned that patients should copy the lifestyles of those who appeared immune to tuberculosis. They should live in well-ventilated houses in the country and spend much of their time outside breathing fresh air. According to Bodington,

There is evidence that the open-air regimen may have improved the health of some tuberculosis patients. Records for the Dreadnought Hospital in Greenwich, one of the first British hospitals in which such methods were adopted, appear to show that there were benefits to this approach. From 1900 to 1905, the overall mortality of consumptive patients in open-air wards was less than half that of those who received the orthodox treatment of the day.

In June 1915, the eminent scientist and Master of Christ's College, A. E. Shipley (1861–1927), judged the open-air treatment of sick and wounded soldiers at the First Eastern a success, particularly for those with pneumonia. Some 6600 patients had passed through the hospital, with a death rate of 4.6 per 1000. Sixty patients with pneumonia had been treated, and 95% of them recovered. Critics ascribed the low mortality at the hospital to the absence of “bad cases,” but according to Shipley, some convoys arrived from the trenches almost entirely made up of them. In his opinion, the open wards produced much better results than closed ones.

The treatment at Camp Brooks Hospital took place outdoors, with “a maximum of sunshine and of fresh air day and night.”37(p1747) The medical officer in charge, Major Thomas F. Harrington, had studied the history of his patients and found that the worst cases of pneumonia came from the parts of ships that were most badly ventilated.

The curative effects of fresh air were investigated at length by the physiologist Sir Leonard Hill (1866–1952) in the years following World War I. He reported favorably on the effects of sun and air when judiciously applied, particularly for tuberculosis.39,40 In 1919, Hill wrote in the British Medical Journal that the best way to combat influenza infection was deep breathing of cool air and sleeping in the open

The Open-Air Treatment of PANDEMIC INFLUENZA


Ioannidis surveyed 23 different seroprevalence studies and found that “among people <70 years old, infection fatality rates ranged from … 0.00-0.23% with median of 0.04%.”